So, a new theatre Tuesday comes by and in this case, as I saw this musical in English, that is the language I would want to make the review in. As it is my first trial, please don’t be too hard on me! 😛 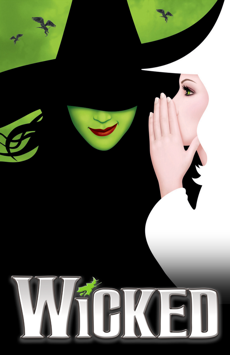 Elphaba, the Wicked Witch of the West, is dead. That is the news that congratulates all the inhabitants of Oz. At last, fear will end, no more fighting, no more flee in terror at the view of a green face in dark robes. But, whilst Glinda the Good Witch also seems to be happy about the end of her eternal rival, on the other side she feels like something is dying inside her. Because, long ago, they were schoolmates… and even maybe friends. But, how the rest of Oz would react if they knew?

So, the beginning of this story is quite simple: first, this musical has never been adapted to Spanish; so, while I was living in Spain it was impossible to attend a play. But some months ago, for the fourth time in my life (and not the last, I went again briefly after that 🙂 ) I went to London to have some tourist holidays. And my boyfriend and I decided to go to see a Musical in the West End. The chosen one? The only one not available in our country of origin.

The truth is I already knew well about this musical and I was quite excited to see it. I have a cousin, without going any further into details, that chose an Elphaba’s song for her graduation in the Singing subject during her Drama studies. Being honest, the most difficult one indeed.

I must admit that seeing a musical that is not in your mother tongue, even when you are used to work in it (English) since almost a year ago, is not always as easy as it seems. Specially when the coral songs came out, in some occasions it was quite impossible to understand a single word. But, in general, the sense of the song was quite understandable.

On the other hand, it was awesome to see the quality not only from the actors, dancers and singers, but also the stage assembly, the scenography and the decoration of the stage. Very high quality, you got absolutely inmersed in the plot from the first moment.

The character of Elphaba was quite heart-touching, to be honest. At the beginning, I was not sure wat is was going to happen. But seeing the flashbacks, her feelings, her true story… It’s an interesting twist on the «Wizard of Oz» story. And the voice of the actress, even if it was not the super-well-known Idina Menzel (the American version) it was really awesome. On the other side, I wasn’t sure if I wanted to slap or to hug Glinda – such an annoying but sweet character at the same time.

As a latest remark, I would like to add that, in this case, I really enjoyed the songs 100%. I will try to explain myself: when I have seen musicals in Spain, adapted from Broadway or West End’s musicals, specially in cases that were very well-known ones –Anastasia, The Lion King– I got always angry about the fact that the translations were NOT EVEN CLOSE to the original ones that were made in the original films. But, in this case, it was not adapted to a film or similar before, the repertoire was original and, I don’t know – how it sounds so good when a musical is in English?

As a conclusion, I may say that this is a musical that I recommend, no matter the age, to everyone that like the classical stories seen by a new point of view. A story of friendship, rivalry, love, loyalty and integrity that will make 3 hours pass like half an hour (break included).

Have a very nice week!!