Hello readers! New month, new «Theater Tuesday» with another Musical in English. I must confess that I saw this even before Wicked one, but that’s living… 🙂 I hope you’ll enjoy it as well! 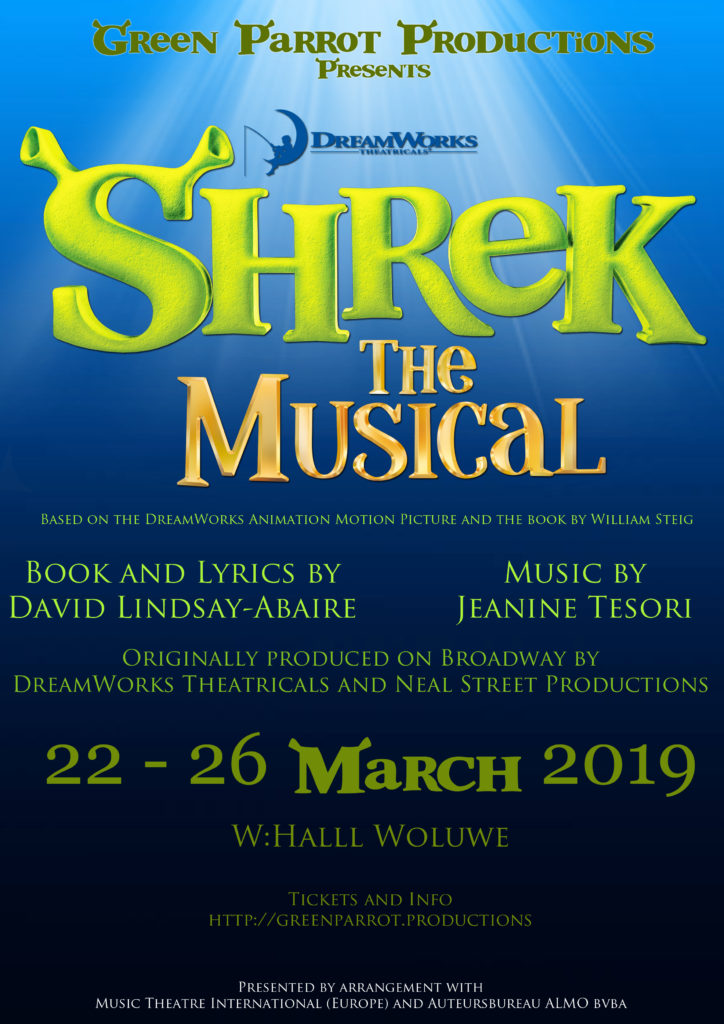 Sometimes, fairy tales are not as they were told to us. Sometimes the hero is not a bright and white knight, neither the princess is a helpless damsel in distress. If we add a green ogre, a too chatty donkey and a lot of magical creatures looking for revenge against a tirant king, the mix turns explosive and hilarious. Will Shrek, the green ogre, find that he is not better alone but that he can love and be loved and return? And is Fiona’s fate to marry a king that actually doesn’t love her except for the fact to turn himself into king?

At this stage, probably, if I say anything about «Shrek», everyone will already pretty much know about it. The success of the films franchise from the very first one is a proof of it. But it’s true that, even if I knew that the musical existed on Broadway, I never imagined that I would be able to see a version next to my house. Another advantage, I guess, of moving to Brussels.

As the company that performed is also native British, the dialogues were quite easy to understand for someone whose mother tongue is not English (even when that’s true that you should have a trained ear, at least a little, to get everything). The only problem, as it also happened in Wicked, roots on the group songs. A lot of voices singing at the time in different tones and sometimes in canon or other ways puts a little struggle at the time of understanding. But, in general, and given also that in general the dialogues are pretty much similar to the ones on the movie (I watched it some months before in original English, but I swear it was not on purpose for the musical. That came after LOL) the story seemed quite easy to follow.

The songs, in general, are not the same included in the movie’s OST, excepting the ones sang by Donkey during it (including the last version of «I’m a believer» that is the icing on the cake to the show, along with the whole cast 🙂 )

About the special effects and the set on stage, don’t expect a Broadway’s quality one, but I must admit that it’s got a lot on its plate, from make up to scenery. They have tried to make the best possible with quite moderate budget, and I must say that they achieve a pretty good and convincing result.

Regarding the crew, I must say that they are real professionals that will make you enjoy from the first moment. Specially I will highlight both Donkey and Farquad. This last one was THE WHOLE PLAY going on his knees! Amazing!

By the way, yes, they also have a built dragon on stage to chase Shrek, Donkey and Fiona and finally fall in love with Donkey and finish Farquad. It was awesome!

The music, as far as I recall was live also, which gives a good point too to the play.

(All images in this review belong to Green Parrot Productions Website).